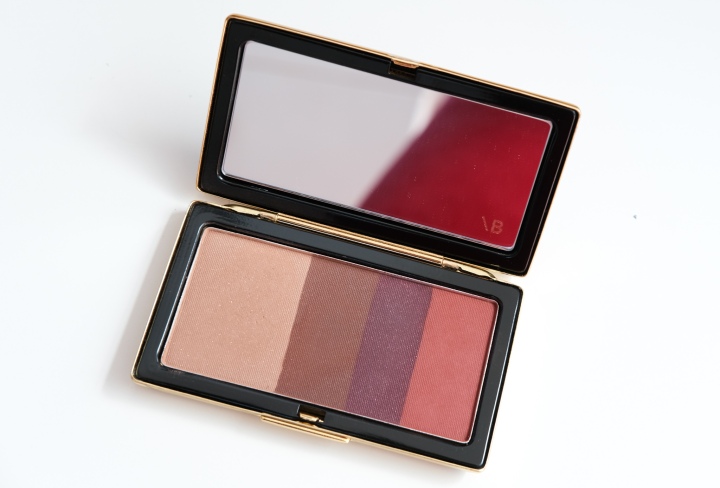 Victoria Beckham’s makeup line is one of the few influencer/celebrity brands (those seem to be sprouting all the time now) that I was intrigued enough to try out. Look and selection wise, it’s a very grown-up, polished and sophisticated line. You can take the Spice out of the Girl, but you can’t take the Posh.

I opted for one of their Smoky Eye Bricks. Tweed was the option that called to me the most, and it’s ironically the “spiciest” colour story. It’s made of warm, cinnamon browns, an aubergine shade and a saffron-red. Delicious. The lightest shade, Caramel, is also the largest in the pan. I’m sure the logic behind this is because this will likely be the colour that you’ll use the most, and it makes sense in this case: Caramel is a medium brown that’ll work as a transition shade for a lot of skintones, in a variety of looks.

All of the shades are matte with a few specks of shimmer, with Rust (the red shade) having the least shimmer. You can see the specks all across the palette in the picture below with direct sunlight:

That same shimmer totally disappears when you apply the eyeshadow though. It’s not even a matter of fallout, it just totally blends away, so I would consider Tweed a matte palette.

Now, performance wise is where this gets tricky. Using an eyeshadow primer (an actual eyeshadow primer, like Urban Decay’s Primer Potion, not a concealer) the colours are easily built up and they last the whole day without creasing and with minimal fading. Without one, they struggle. They really do. Specially the two middle shades, as you can see by the swatches below:

Cashmere and Oxblood are dry and very hard pressed, and it’s tough to get pigmentation out of them. Caramel and Rust are smoother, with Rust being the smoothest and with the highest payoff. For testing purposes, I applied them on my bare lids, and that was the nail on the wearing-this-without-primer coffin. The look was extremely creased within two hours. Two hours!! That never happens to me. I have pretty oily eyelids, but most eyeshadows, even drugstore, last more than 5 hours without creasing. You would expect that matte, drier eyeshadows from an expensive luxury brand would last longer.

Below are swatches with Cashmere and Oxblood built up to as much as I could with no primer. It took 4 to 5 fingers swatches each to be able to get to that opacity.

Pigmentation issues aside, I didn’t really have an issue with blending. Over primer, they blended nicely and I didn’t feel like the look was getting patchy. Without primer, Caramel and Rust remained pretty smooth and easy to diffuse, and there was virtually nothing to blend with Cashmere and Oxblood – they had to be patted on, not swiped on, in order to show up.

The packaging is a small metallic compact with a tortoise shell like design. It’s heavy and vintage looking. Something you might like to pull out of your bag to use the mirror to reapply lipstick. It’s definitely a luxurious packaging. In total there are 8,5 grams of product, and it costs £50.

All in all, Victoria Beckham’s Smoky Brick is like Mona Lisa. Expensive, smaller than you might expect, and if you had to describe it in one word, lukewarm. You can get a good look out of it if you use primer, but if you’re adverse to that, stay away.