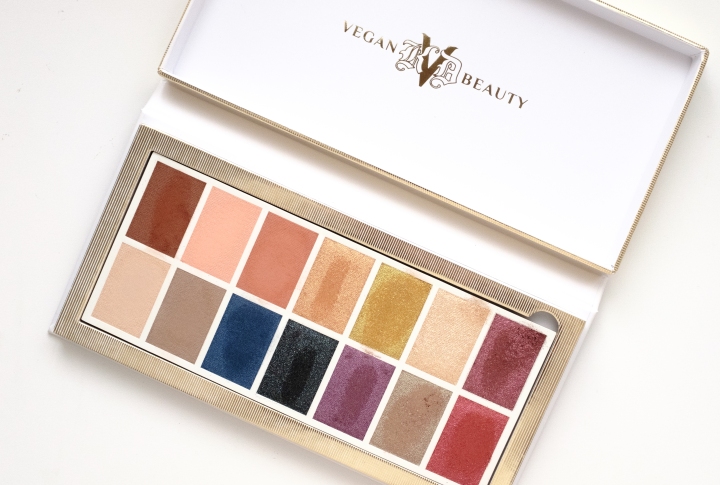 I got this as a Christmas gift from Sir Fiancé. I think it was part of their holiday releases, but it’s still available for sale. He got me this, and I quote, “because since Kat Von D is no longer part of it, it’s ok to review things from this brand again. And this packaging is 100% recyclable”. I’m in shock at how much attention he pays. Actually, it’s worse: he researches.

I don’t think I’m that attentive. Do I need do step up my game? Do I have to start learning about cars?? I’m not ready to care about motors (and I’m an engineer by training!).

Boys don’t have any fun hobbies. It’s all metal and black plastic and tires. Or god forbid, sports. My hobbies are colorful and full of glitter. So much more appealing.

Speaking of glitter (nice segue, right?), the KVD Edge of Reality palette has 6 mattes and 8 shimmer shadows, and it’s in those shimmers that it really shines – literal and figuratively.

First off, the packaging – because it deserves a full section of it’s own.

One of the main selling points, according to the brand, was the fact that this packaging is 100% recyclable: no metal, no mirror, just cardboard (on the outside) and plastic (the actual eyeshadow inserts) with a little indent on the right upper corner so you’re able to detach the plastic from the cardboard easily when it’s time to recycle.

I like having a mirror in my palettes, and I often use them instead of my vanity mirror, but I certainly don’t need them in all of the palettes. They give a certain luxurious feel to a palette, but they’re not an absolute necessity. And this packaging, in spite of being fully cardboard with no metal hinges or pans, still looks and feels very luxe. The white raised print on the front of the palette, the gold trimming and details, the large pan sizes – all feel very well made.

It’s not easy making something Earth-conscious that still emits that high end vibe. Hippies aren’t usually a synonym of class. Kudos to KVD.

There Is a translucent quality to these matte eyeshadows – which is not necessarily bad, it’s just a feature (reminds me of Bobbi Brown’s single matte eyeshadows). They are easy to blend and give a softer wash of color. The only problem is that there is not a dark enough matte to deepen the eye look in case you want to do something smokier or more defined. Also the two lightest shades, despite being different (one is cool toned, the other is warmer), due to their sheerness, are kind of redundant.

Escapist looks like a satin on the pan, with a hint of shimmer, but it’s mostly matte on the lid. It’s definitely the worst performer: you can’t really build up pigmentation, and it’s quite patchy.

All of the swatches bellow are without primer and using a dry brush.

The shimmer shadows have that sort of hybrid texture, between a powder and a cream – they’re very much like that powder gelée formula (like the MAC Extra Dimension shadows) where they can be used dry for a subtler wash of color, or wet for higher payoff and intensity. Abyss and Teleport are the two shimmers that behave more like a typical metallic eyeshadow rather than a powder-cream formula. Unlike most blacks with shimmer, Abyss actually retains it’s sparkles – it won’t become a boring matte black once applied on the lid.

Green Screen and Dimensions are gorgeous and the pictures do not make them justice. Green Screen, Transformations and 4-D have a warmer colored base eyeshadow (like a sort of brownish matte base eyeshadow), and then different colored shimmer particles on top, which makes these shadows so multidimensional. Green Screen is definitely my favorite, and I think it might be a dupe for the infamous Natasha Denona eyeshadow, Lime Chrome (from the Gold palette that I refuse to purchase because I already have dupes for all the other eyeshadows in my collection 3 times over).

It was very hard to convey the dimension and intensity of these shadows in the swatches below. Guys, I tried my best. I think the swatch of Oculus is the worst offender – it looks somewhat orange and not very intense, but Oculus is actually a very pigmented and opaque gold-bronze eyeshadow.

Again, all of the swatches bellow are without primer and using a dry brush.

Other details and final thoughts

There is no powder kick up with the matte eyeshadows. That and the fact that the shimmers are so creamy make fallout practically non-existent.

When it comes to lasting power, I did a wear test with a primer (Urban Decay Primer Potion) and had no problem with the shadows lasting a 10 hour day. Other reviews I have read mention that these shades fade rather quickly, but they didn’t use a primer, and I have not tested this without one or with concealer on the lids, so I can’t attest to that.

All in all, is the KVD Edge of Reality palette worth it? If you like the shimmers, yes. To me this is what some people call a “companion palette”, which is a palette you can hardly use by itself for a complete look, but that contains a lot of eyeshadows that add interest and variety to the core and essential shades you probably already own. When it comes to my palette arsenal, I have enough company for the rest of my life, and still there are shadows in this one that I have nothing similar to. Abyss, 4-D, Green Screen and even Dimensions – so special.